Surprising Similarities Between English and Italian 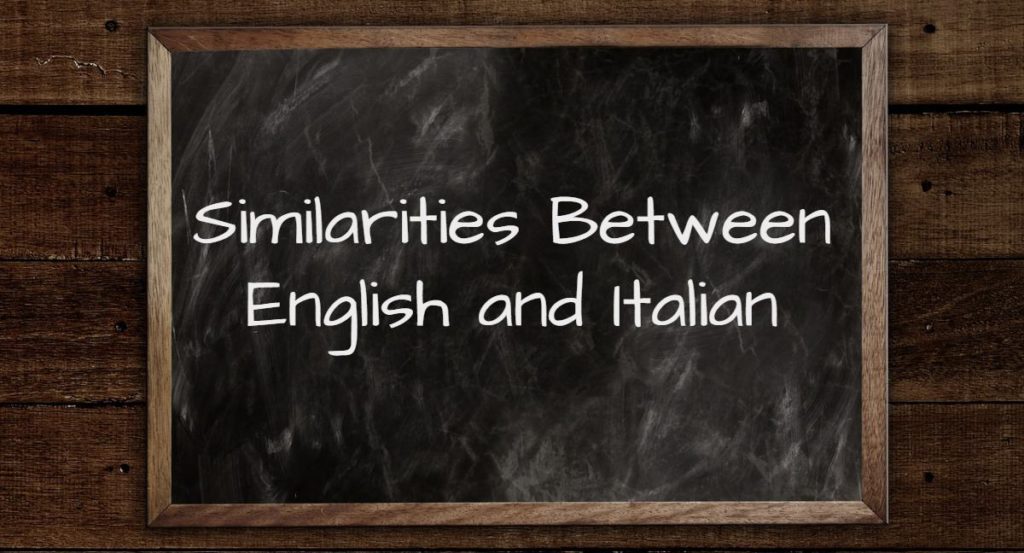 In case you haven’t noticed, there are some similarities between English and Italian. Many Italian words have made their way into English over the course of several centuries, and so you will be happy to know that you already are using quite a bit of Italian. And of course, the alphabets are nearly the same.

More recently, English words have traveled in the other direction, finding themselves in Italian daily life. The result is that you’re probably already quite familiar with more Italian than you realize!

If you are a musician, you will be familiar with the terms such as bel canto, cello, mezzosoprano, pianoforte, and solo. Structural design has borrowed words like cupola, loggia, and stanza. Of course then there is Italian foods such as ravioli, mozzarella, lasagna, vermicelli, or porcini. During the course of our everyday lives, Italian words such as paparazzi, graffiti, mafia, and ghetto are used frequently. So as you can see, your own vocabulary already consists of several Italian words!

Because of the growing influence of American culture through the media, this has become a two-way street. There are many English words that have been directly adopted by the Italians without translating them.

Some of these words are club, flirt, bar, shopping, spray, and style. Terms relating to business and technology are particularly common, such as meeting, staff, marketing, computer, mouse, and fax.  Or sometimes they take an English word and make it Italian by adding an Italian suffix.

For example, the verb, “to download” should be translated as “scaricare,” but instead you’ll often hear an Italian say, “downloadare.”  When visiting Italy, it may seem like you hear more English spoken than Italian, especially in the cities where tourism is heavy, such as Florence, Rome and Venice.

Politicians and academics have made a series of efforts to defend the Italian language against this foreign invasion. A campaign against English phrases and grammar has been launched by some members of Parliament because many feel that the influx of the English language and culture is threatening to diminish the importance of the Italian language, and therefore the culture. (Benito Mussolini was himself a champion of this cause.)

Not long ago, Italian officials vowed to clarify the language used by the state to communicate with its citizens by declaring war on foreign words. That’s not likely to happen, of course, but it underscores the importance of this battle.

However, we should also point out that there are many words that Italian and English already share due to common etymology or root word origin. These are referred to as “cognates,” or words that look similar and have nearly identical meanings. (This term derives from the Latin cognatus, meaning blood relative.)

The list of cognates is long, and being aware of them can give you an initial jump start in learning Italian.  A few examples of these are as follows: farmacia—pharmacy; intelligente—intelligent; necessario—necessary; dividere—to divide; studiare—to study; and so on. Learning these can give a huge boost to your vocabulary.  I’ll list some more in a subsequent chapter.

Furthermore, there are letter groupings that can help you decipher many words.  For example, the English suffix, “tion” becomes,“zione” in Italian, such as station, stazione.  Or the English, “ly” translates as, “mente.” (e.g. probably = probabilmente).  Again, a longer list of these will be provided later.

Then there are also the false cognates, which are sometimes referred to as “false friends.” We don’t want to confuse ourselves by discussing these now, but we will take up this topic in a later chapter. For now, let’s keep things straight forward and focus on the similarities.

A common opinion is that Italian is more difficult to learn than English. Well, sorry to tell you, but it’s true—at least in the very beginning. The learning curve for English as a second language is much quicker than learning Italian as an adult.

But so what? When you were a child learning English, you didn’t know whether it was easy or difficult, and therefore you just didn’t think about it. When learning Italian, remember that everyone was a beginner at some time in their life. It also helps to keep in mind that making mistakes is how one learns how to do it right (eventually). Don’t be afraid to open your mouth and embarrass yourself!

You may think you will not be able to roll your r’s, but the fact is that many Italians cannot roll their r’s either. In Italy, what is known as the “soft r” (erre moscia) is in many cases a result of a regional accent or dialect.

It is also traditionally associated with the speech of the upper class. The Italians from the north of Italy, close to the French border, are famous for this type of speech variation because of the influence of the French language on the local dialect. On the other hand, the rolling “r” is often exaggerated in the south.

If you want to learn to roll your r’s, you should try placing your tongue on the roof of your mouth, close to the front and trill your tongue. If that doesn’t work, then pretend you are revving up a car motor or repeat the following English words a several times; ladder, or butter.

Taking classes at a language school isn’t a bad idea if you have the time and money.  But what if you don’t have any language schools close to your home? That’s OK. In this age of the Internet, a school being geographically close is no longer necessary. You can take courses online, listen to an Italian audio course, or even find an Italian pen (email) pal.

There are many ways you can practice your Italian, and the Internet can help you.  Some of the online courses are free, and you study on your own time. Sharetalk by Rosetta Stone is a good one.

If your group of friends does not speak Italian, there are ways around that, too—or maybe you just need to get some new friends (kidding…sort of). Contact the Italian department at your local college or call the Italian American organizations in your town.  They often sponsor wine tastings and other events where participants can meet and mingle to practice Italian.

Of course, the fastest way to learn Italian is with a total immersion course.  By spending two to four weeks at a language school in Italy, you will improve your Italian more in that amount of time than in a full year of high school or college Italian.

The mornings (9:00 to 1:00) are usually devoted to the classes, but in the afternoon, you are at leisure to visit the churches, museums, and other sites. No, it’s not cheap, but definitely worth the experience if you have the time and money. If not, well, that’s what this book is for!

If you are only planning a short visit to Italy, then you will need to know the Italian survival phrases, such as “Where is the bathroom?” or “No, I don’t want to buy a salami from your brother.” These types of helpful phrases will be covered in the second part of this book.

Similarities Between English and Italian

One final thought on learning Italian (or any language) in general: use a “shotgun” approach.  In other words, mix it up. Watch Italian movies, listen to Italian music, buy a dual language book or parallel-text version (English on one page, the Italian translation on the opposing page).

Several cable companies broadcast Italian programming on RAI International.  There are also many Italian radio stations accessible from the Internet; Virgin Radio, for example. Whatever it takes. The point is, don’t rely on just one type of input to learn the language—try a bit of everything.